The 4th Project meeting (including work packages and steering committee meeting) of the JOINTISZA project was held in 6-8 November 2018 in Belgrade, Serbia. After meetings held in Hungary, Slovakia and Romania the fourth time Serbia, the Jaroslav Cerni Institute hosted the meeting in Hotel Palace, Belgrade. The meeting was opened by Mrs Marina Babic-Mladenovic Director of Jaroslav Cerni Institute. The meeting was also linked with a Tisza Group discussion held on 8 November 2018. More than 45 experts, representing the five countries of the Tisza River Basin – Ukraine, Romania, Slovakia, Hungary, Serbia –  and the consortium’s partners participated on the events.

The project run since January 2017 and has already reached several milestones and produced documents as a basis of the updated Integrated Tisza River Basin Management Plan (2nd ITRBMP). From Slovakia the VuVH representatives, Ms Jarmila Makovinska summarized that the pressure analysis and status assessment for surface waters of the Tisza river and its tributaries have already been finalised and the first draft of the Join Tisza Survey has also been produced. Thd related Joint Programme of Measuers has also been compiled.

An important element of the project is dealing with water quantity management issues and groundwater issues aiming at to investigate on the available water resources and water demands in the Tisza River Basin. In the frame of the relevant workpackage a survey has also been done to investigate on the future needs and demands.Wirhin this workpackage a pilot activity on urban hydrology has also been completed. Mr János Tamás, professor of the Debrecen University, introduced the results of the pilot action.

The representative of NARW from Romania summarized the outcomes reached in relation to the flood management issues.The flood manamagement related information has also be put together in the project progress period and currently the win-win measures from both water and flood management point of view are being assessed and summarised and will be available by the end of the year.

Results of data gathering and analysis, which have been put together in relation to surface water, groundwater and flood management will be integrated into the updated Integrated Tisza River Basin Management Plan (ITRBMP). GWP – CEE has and important role in summarizing information gathered in three workpackages of the project and put together the available information on surface and groundwaters, on water quantity and flood management issues. The Synthesis element of the project has only been started recently and as the results of this element the overall and updated integrated Tisza River Basin Management Plan will be produced. It was agreed that the first editorial meeting of theupdated ITRBMP will be held on 29 January 2019, Szolnok, Hungary.

Within the synthesis work package an important pilot activity, focusing on a method of shared vision planning is also under impementation. Coming to shared vision planning, an important point of the project is the stakeholder involvement. WWF-HU together with REC and GWP-CEE working on the involvement of stakeholders and compile the Public Involvement and Participation Stategy (PIPS). 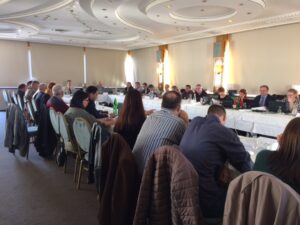