On the 31 October 2018 DSPF Networking event was held in Vienna City Hall in Austria.

DSPF (Danube Strategic Project Fund), is a facility aiming at supporting the implementation of transnational strategic projects aligned with the objective of the EU Strategy for the Danube Region (EUSDR), with a specific added value at the interfaces between cohesion and enlargement/neighbourhood policy (more: https://www.danube-capacitycooperation.eu/general-information-about-the-dspf).

The main objective of the event was to introduce the supported projects and project ideas and discuss about their strategic relevance from the Danube Region point of view.

In the frame of the event plenary, representatives of three priority areas, the European Commission, the EUSAIR (EU Strategy for the Adriatic and Ionian Region) and the Danube Strategy Point, as a renewed organisation of the EUSDR, introduced their statements.

Within the Danube River Basin Management Plan four Significant Water Management Issues (SWMIs) have been identified, and one of those is focusing on the reduction of hazardous substances pollution. The current project idea is aiming at to model, monitor and manage the hazardous substances pollution within the Danube River and more over its also aims capacity building. 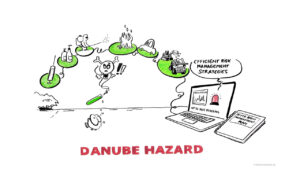 Further details about the event and information about the project ideas can be found in the following websites:

General information about the DSPF

The graphic recording videos presented at the DSPF networking event in Vienna have been uploaded to YouTube and the the DSPF blog.

Have fun with the unique graphic videos, which give a good overview on the supported projects and projects’ ideas! Don’t miss to watch them!