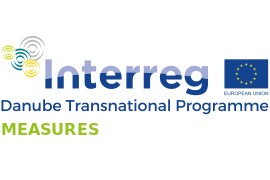 Ten countries unite for a common purpose: the protection of migratory fish in the Danube River Basin

The MEASURES project will officially be launched on October 1st 2018 in Austria during an event hosted by University of Natural Resources and Life Sciences in Vienna. The launch is part of a two-day kick-off meeting bringing together key stakeholders and international project partners to focus on the project’s main topic: managing and restoring aquatic ecological corridors for migratory fish species in the Danube River Basin, or MEASURES.

The Danube is home to some of the most important sturgeon and other migratory fish populations (e.g. shads, barbel, nase etc.). Bulgaria and Romania hold the only – still – viable populations of wild sturgeons in the European Union. The remaining populations have faced a dramatic decline in the past decades due to man-made barriers that prevent their migration and their ability to spawn, such as dams or hydropower plants. These barriers fragment the natural habitats of migratory fish, making it impossible for fish to move up or downstream to spawn or reach feeding grounds. In the long term, these barriers, along with other anthropogenic human activities such as overfishing, pollution and habitat destruction, will lead to the extinction of the species unless action is taken now.

In order to address the problem of migratory fish reaching their habitats, MEASURES will lay the foundation to establish ecological corridors by identifying key habitats and by initiating transboundary protection measures along the Danube and its main tributaries. During the three-year implementation timeline, the innovative actions will focus on the following:

developing and testing a methodology for mapping and identifying habitats for migratory fish species;
design a harmonized strategy for restoring ecological corridors and supporting implementation in future management plans;
restocking of two native species to conserve their genetic pool in Hungary (Acipenser ruthenus)  and Romania (Acipenser gueldenstaedtii), in order to establish a network for concerted repopulation of the target species and to compose a manual for the operation of broodstock facilities that will provide the offspring needed for future re-population efforts;
implementation of the MEASURES Information System will facilitate the access of relevant information to experts, decision-makers and the general public. Concrete input into future drafts of policy- and management plans will secure the consideration of our project outcomes into sustainable measures aimed to restore the function of ecological corridors.

The Danube and its tributaries are key migration routes for sturgeons and other migratory fish, such as barbel and nase. These species are excellent bio-indicators of the effectiveness of ecological corridors due to their specific needs during their long lifecycles. This is especially true of sturgeons, which typically migrate long distances and are an important part of the natural heritage of the entire Danube Region. Their dramatic decline in the last few decades has become an issue of basin-wide importance, documented by the Danube countries and the European Commission.

“The Danube is a key lifeline in Europe connecting important bioregions, economies and cultures. Securing biodiversity is fundamental to human development and rivers are one of the most threatened ecosystems on our globe. Our project contributes to these challenges specifically for the Danube River in its role as an important ecological corridor connecting natural heritage sites and an organism group key to a sustainable future of the river, migratory fish including sturgeon species”, Univ. Prof. Dr. Thomas Hein, University of Natural Resources and Life Sciences, Vienna.

The event will be organized by the MEASURES (Managing and restoring aquatic Ecological corridors for migratory fish species in the Danube River basin) project and is co-funded by the European Union (ERDF, IPA). The MEASURES project started in June 2018 and is scheduled to end in May 2021. For more information about it, visit the project website: www.interreg-danube.eu/measures.