The PLASTIC CUP is a Hungarian civil initiative was launched by Természetfilm.hu Association film making society for the cleaning of the Tisza river. With the aim to call the attention to the growing problem of plastic pollution of our water resources, the Cup itself is  a real 10-days environmental action towards cleaning the floodplain area of the river. The initiative known as the “Water Clean-up” is organized by Természetfilm.hu Association, the Hungarian Association of Environmental Enterprises (HAEE) and the Sonar Diver Team.

In 2018 – altogether for the sixth occasion – the waste picking race took place between 4 –12 August 2018 on a 70 km long section of the river from Szatmárcseke to Tiszamogyorós. It was combined with a pre-race started in Transcarpathia (Ukraine) few days before the Cup.

The race started with the construction of the boats that already demonstrate the plastic problem: the 21 plastic boats used around 30.000 collected, waste plastic bottles and other re-used fixtures as main building blocks. Moreover, the unique JOINTISZA boat reduced the use of wood, main construction material for the board of other boats and used wasted plastic pallets destined for shredding and recycling. This led to significant reduction of weight that in combination with using truck tilt to cover the hull of plastic bottles providing buoyancy secured ultimate speed and manoeuvring features to the boat. The international crew lived with this asset and won the speed track of the Cup.  Another criterion of watercraft design is the sole usage of renewable energy as propulsion which can include solar energy, sails and of course, human power via paddles and tricky pedal propulsion systems. All in all, 21 boats, accompanied with around 40-50 canoes, started the race on the 6th August 2018 at Szatmárcseke, with near 350 competitors and volunteers on board.

The civil initiative of the PLASTIC Cup has become to an internationally important environmental and nature conservation project. In 2018 thanks to the support of the Ministry of Foreign Affairs and Trade of Hungary –  coordinating the EU Strategy for the Danube Region Water quality and Environmental risks priority areas and being the partner of the Interreg DTP financed JOINTISZA project –  an international boat participated, with 13 experts from Hungary, India, Italy, Morocco, Norway, Serbia, the United Kingdom and the United States, on board.

The main objective of the international crew was to share experiences in relation to the management of plastic  pollution, which could be taken into account during the update of the Integrated Tisza River Basin Management Plan (having under development in the frame of the DTP–JOINTISZA project), to learn about each other and exploit ways to cooperate in order, among others, to investigate how the PLASTIC Cup can be further replicated in other countries as well. The international guests also shared their experiences during the race in relation to the plastic waste problem. It was clear from the beginning, that the Tisza river plastic pollution is not a unique problem, all participating countries have been struggling with this phenomenon though within different environmental conditions, waste management issues, state of development and legal framework but with the common cause and determination of beating plastic pollution. The international team and the follow-up of the discussion is providing the opportunity to learn about the plastic problem in Morocco, India, Balkan Countries and the UK and by sharing experiences and future joint actions contributing to the solution.

The participants of the derby started with plastic and waste collection on the first day with great enthusiasm, which led them all along the whole race. The efforts of the race competitors resulted in more than 10 tonnes of waste collected along the Tisza floodplain area, which will be mostly recycled and up-cycled thereafter, thanks to the hard and committed works of the volunteers who sorted it after registration by the bankers of the Cup rewarding the efforts of teams by petáks, the official currency of the cup.

Collecting waste is not the only option to gain petáks. Speed- and slalom-trials were organised for the boats and their crew, too. The international JOINTISZA team proved during the speed-trial that they had the fastest boat ever and even more during the slalom trial was demonstrated that the boat had also great power of motion. Moreover, the Plastic Cup is not only about environmental awareness and sport, it places a great emphasis on the cultural values of the region, thus literary quizzes expanded the options for more petáks.

Thus, besides the environmental movement of the collection of plastic bottles and sport performance the event was also an important social-cultural activity. The participants could learn about the main cultural heritages of the upper-Tisza area during the Tisza quiz, they visited the cemetery of Szatmárcseke with unique prow shaped wooden headboards and the grave of Ferenc Kölcsey (a Hungarian poet who wrote the lyrics of the Hungarian national anthem), and took excursion to Tákos and Csaroda where they could visit the fabulous churches built in the medieval ages (i.e. the so called barefooted Notre Dame). 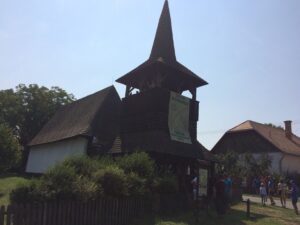 The barefooted Notre Dame at Tákos 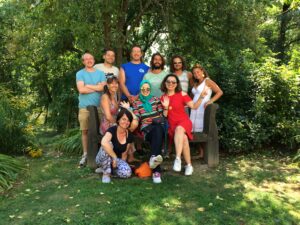 With the power of sport, community building and environmental awareness, the race drew attention to the protection of rivers and the importance of proper waste management, which should be also considered during transboundary river basin management planning process. The Admiralty, the organizing body of the Cup, however, is not stopping, new plans, new ideas have been born to expand operation and reach more people, now, thanks to the JOINTISZA support, not only in Hungary but abroad too. Of course, it’s not only about 10 days a year, Plastic Pirates have been working hard and determined all-year round whether it is in a floodplain forest for winter clean-up, or Danube Day in Transcarpathia, or random events and school for awareness raising, or, most recently, stage of TED at the Sziget Festival, and now looking for sailing on new waters and new cooperations in order to #BeatPlasticPollution.

Whatever and whenever they do, in the heart of every Plastic Pirate there is the Tisza having already stolen pieces and wanting them to go back. In this emergency call, Plastic Pirates will return until there is enough plastic to build boats.  It is a long way to go, as the root of the problem, the flood of PET bottles, or plastic tsunami is also returning each year with the regular flooding coming from across the borders – often thousands of tonnes. JOINTISZA project can and will support the transboundary efforts to stop plastic flood by including the issue in the River Basin Management Plan and lobbying internationally to build coalitions and cooperation. This is needed, as plastic pollution of water bodies does not respect borders and disciplines. many believe that infamous garbage patches are far from us, in the oceans, however, a huge amount of waste is floating through in the transboundary rivers and a part of that stays in the countries. Due to this, we need to also consider river basins, where actions should  call the attention and target awareness raising and environmental education coupled with proper waste management as primary factors to diminish the leakage.

By the end of the week, exhausted but determined and through many scratches, jungle fight and sunburn, and tonnes of litter removed from the floodplain the JOINTISZA team won the  sixth Plastic CUP! “It’s always risky how people never met before will work together in a new and challenging environment but the common cause, the determination and chemistry overcome those, and the team performed excellent by winning the trophy with many friendships and new ideas born on how to #BeatPlasticPollution” said Miklós Gyalai-Korpos, mentor of the team, volunteer and member of the PET Admiralty, alias the organizing body of the Cup. Though time will tell how many of those ideas will be realized, the Plastic Cup is now on the international map of initiatives against plastic pollution and open for cooperation to help the cleaning of rivers. Viktor Oroszi, Head of Department of the Ministry of Foreign Affairs highlighted the supporting role of the EU Strategy of the Danube Region, and the role of  projects of the Danube Transnational Programme, which put a strong emphasis on transboundary cooperation. 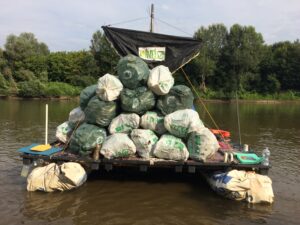 The winning boat of the VI. PLASTIC CUP – the “JOINTISZA” – during the plastic waste collection derby

The award-winning boat was taken by Middle Tisza District Water Directorate with the aim of renovation and exhibition. Although it is also definite: these joint efforts have to be further strengthened and continued for the sake of the long-term successes. Plastic Pirates are ready to continue the battle and sail to new waters. 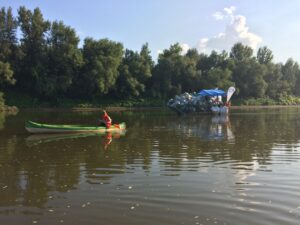 The “PETÉNYI” mother boat – no more waste can be taken…

The JOINTISZA crew specially thanks to Miklós Gyalai-Korpos, mentor of the team, volunteer and member of the PET Admiralty, for his overall support, enthusiasm and for the great design of the winning boat, to the PLASTIC CUP organisers, for the great organisation of the event, to the representatives of IUCN Commission on Education and Communication (IUCN CEC)  and to ERI HUNGARY – European Research Institute Nonprofit Kft.who helped the group in the bout building and waste collection activities of JOINTISZA crew during the race and to the DTP PA4 and PA5 projects’ team members, who supported the JOINTISZA crew during the race. 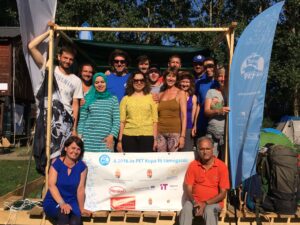 Special thanks has to be expressed to the fantastic international team, which lead the JOINTISZA boat towards victory.

For more information on the Plastic Cup:

Official Hungarian Press release can be downloaded from here.

The International boat was financed by the JOINTISZA project (reference DTP-1-152-2.1).

Project co-funded by the European Union (ERDF, IPA funds) and by Hungary

The article was written by Diana Heilmann, Miklós Gyalai-Korpos and Viktor Oroszi.