TID(Y)UP – WINDOW WITH A VIEW – TISZA ROUNDTABLE ABOVE A 1.4 HECTARE LARGE PLASTIC ACCUMULATION 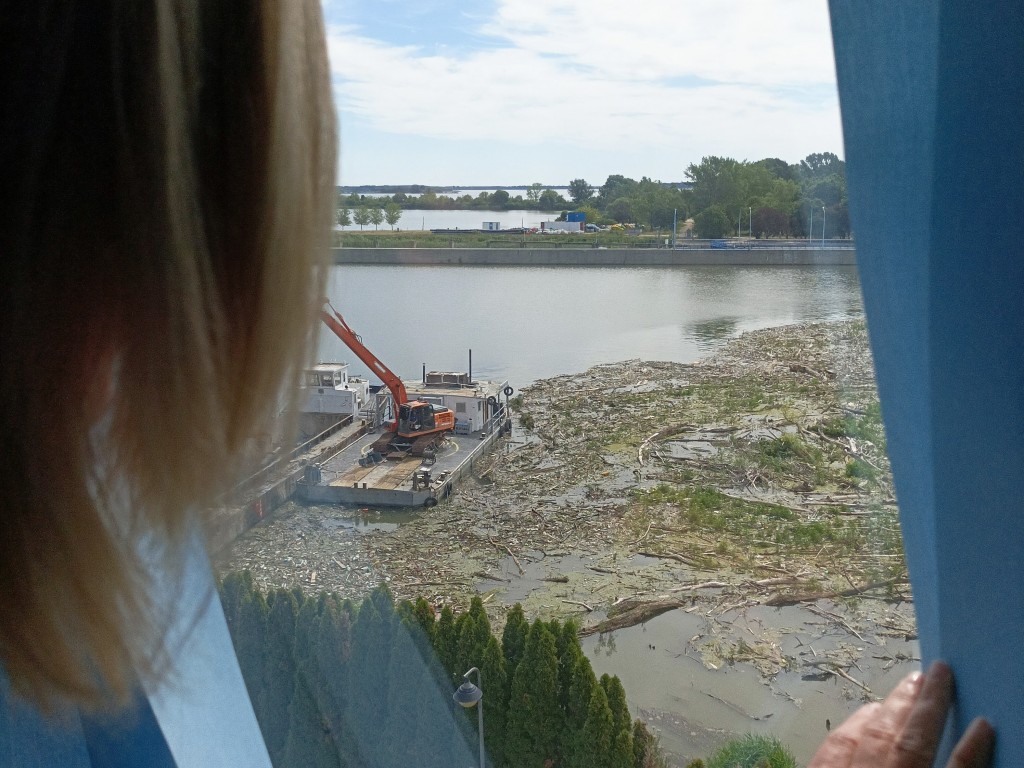 When Vásárosnamény’s delegate to the 7th Tisza Roundtable stood up at the coffee break, she was shocked – literally. Environmental officer Erzsébet Széles pulled the curtain only to find out that the conference room has a view to one of the biggest riverine litter accumulation in whole Europe. Below her, heavy machinery removed driftwood and plastic from a floating waste-jam of nearly 1.5 hectares in size. To the right, the Hydroelectric Power Plant of Kisköre, on the other shore, the River Guard Center of the Plastic Cup initiative. Organizer HAEE (Hungarian Association of Environmental Enterprises) made a good choice when trying to find a venue for the workshop. Report by Gergely Hankó and Anna Istenes

According to Water Authority experts, the floating waste accumulation, containing tons of riverine plastic, reached the size of 1.4 hectares as per May, 2022

Naturefilm.hu Society, the brainparent of the PLASTIC Cup initiative and lead partner of the Tid(y)Up project, have been working for a plastic-free Tisza river for 10 years now. The HAEE has been working for the preservation and protection of our environmental resources for 30 years, which is why it helps to achieve the goals of the PLASTIC Cup initiative with its network of contacts and professional knowledge. For years, the two organizations have been cooperating with the Hungarian authorities and decision-makers in the waste disposal of the Tisza, implementing international projects in order to preserve the purity of our living waters. The two also teamed up in the Danube Interreg Tid(y)Up – F(ol)low the Plastic from source to the sea: Tisza-Danube integrated action plan to eliminate plastic pollution of rivers. 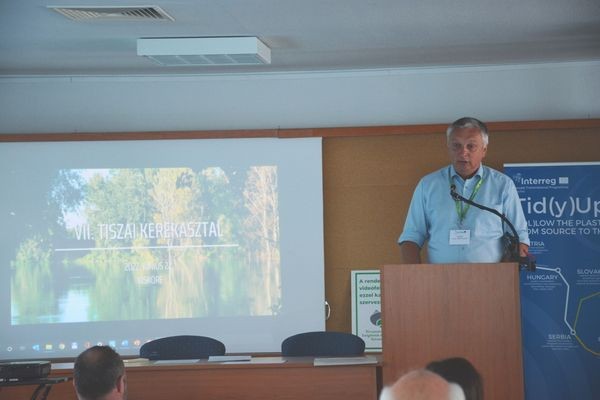 One of the keynote speakers of the 7th Tisza Roundtable – István Láng, the Director General of the National Water Authority Directorate

The attendees were greeted by István Láng, the Director General of the National Water Authority Directorate, acknowledging the efforts and results of the contributors, which are exemplary for all involved and interested parties. He considers the most important task to be the prevention of the generation of waste and the formation of a related attitude, in which the cooperation with our association is also excellent. Speaking about the problems, he said that as one of the consequences of climate change, it is necessary to prepare for the effects of water accumulating in abandoned mines (leaching), the effectiveness of wastewater treatment also affects rivers, and the removal of waste from rivers and lakes also imposes a task on the water department.  He emphasized the importance of personal relationships and the fact that this task, which requires enormous energy, is carried out voluntarily and cheerfully by the contributors, as they are aware that they are doing it for the river and the communities. After that, Attila Lovas, director of the Middle-Tisza Valley Water Authority Directorate (KÖTIVIZIG), spoke about the environmental protection and water management importance of the Kisköre dam, with special regard to periods of drought and the importance of guaranteeing the water level. They have been cooperating with the PLASTIC Cup team since 2019. The NGO helps in collecting, selecting and managing riverine litter so less waste ends up in the oceans and the landfill, and the savings are also significant, which can thus be used for professional tasks. The duties of the Board have been expanded, more attention should also be paid to tourism, since the river, as a tourist attraction, has the potential to create jobs. 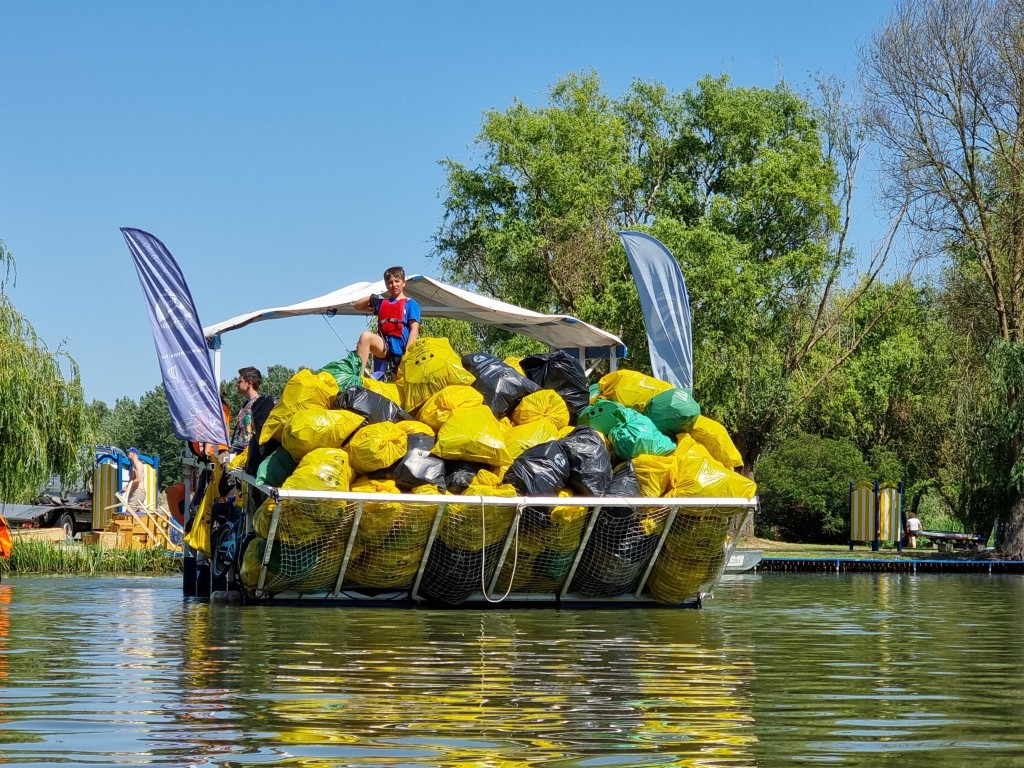 Andrew, the 11 years old volunteer of the PLASTIC Cup initiative is standing on a day’s catch on the 3rd Tisza Lake Plastic Cup – the warm up event before the 7th Tisza Roundtable discussions.

Diána Heilmann, professional advisor for the “Water Quality” priority area of the Danube Region Strategy, spoke about projects affecting the Tisza water-catchment area (Join Tisza, Tid(y)Up) and further application opportunities, drawing attention to the prevention of plastic pollution, the starting points of which are prevention, attitude formation and appropriate selective waste collection. The subsidies also cover the effects of pollution, and for this purpose conferences, workshops, publications and professional materials are created, which must be continued. He emphasized that the drinking water base must be protected everywhere from microplastics, and that the state administration and civil organizations must cooperate in the implementation of water management plans. Dávid Attila Molnár, chairman of Tid(y)Up LP THU and co-founder of the PLASTIC Cup, started his presentation with a short film made about a large-scale international river cleanup action (3rd Tisza Lake Plastic Cup) attended by 250 participants from 11 countries, including students of the Global Water Partnership summer camp, who enjoyed the  river cleanup a lot. According to his talk, THU also undertook related activities for the success of the task, expanding its activities to the field of research, detection of plastic waste, communication, legal harmonization, digitization, e.g. developing manuals and intellectual products for partner organizations in neighboring countries. Dávid Attila Molnár closed his lecture with an invitation to the River Guard Center on the other side of the river.

Dr. Szabolcs Szanyi, the president of the Papilio Environmental Protection Association (Ukraine, Nagydobrony) dazzled the audience with the diversity of the fauna of the Szatmári plain, the presentation of the multitude of species, and then with the picture in which a 3-4 meter thick layer of waste covers the otherwise 7 m deep Latorca bed. The ecological disaster continues at the moment, as waste piles up in this area, and if there is no one to notice and eliminate it, it means the end of diversity. The Association is active on this and for that reason, involving local governments, civil organizations, and the population – but this is still not enough. Effective partner cooperation, regulation and financing are needed to create waste management and to shape attitudes – and all this must be done continuously. HAEE chairman Gergely Hankó supplemented what was said with his personal experiences, emphasizing the launch of several innovations, which processes, however, were halted due to the war in Ukraine. Last year, GPS tags sealed in bottles were released into the rivers to follow the path of the waste and uncover the plastic accumulations. Cooperation in this field has already expanded with Austrian partners, as almost everyone is involved in this topic. He emphasized the importance of dialogue, the involvement of the relevant groups, communities, and authorities in the most efficient work possible, also at the international level. It can be said that 60-70% of the waste extracted from the Tisza can be kept in circulation, the environmental protection industry has been connected, but the expansion is continuous, as the potential of waste recycling is still unexploited.

Sándor Pásztor, adviser to the Romanian Ministry of Environment, Water and Forestry, reported on the developments in Romania, and the participants could follow them on a map. Reducing surface water levels are also a significant problem in Romania, so the construction of reservoirs, the dredging of backwaters, and the reopening and revitalization of them are also on the agenda. In addition to the construction of emergency reservoirs, the rehabilitation of reservoirs, water retention, and the strengthening of embankments, great attention is also paid to the preservation of biodiversity, especially with regard to the expected effects of climate change and the fact that water is a tourist attraction everywhere. On embankments, e.g. a bicycle path is created so that tourists can get to the waterfront in an environmentally friendly way.

Sándor Fülöp, the president of the EMLA Environmental Management and Law Association, gave a lecture on the rights of rivers, presenting the practice of some countries (USA, Bolivia, India, New Zealand…) in this regard. The river, as a legal entity, is then not the object but the subject of the law. Thus, it is entitled to protection, the question is who acts on behalf of a body of water, a natural landscape, with appropriate authority. The river, as it is alive, must and can be protected, because it can even be a victim of crime (pollution, overuse), so criminal law can play a role here as well. The Tisza could also have legal personality, if there is someone who acts “on behalf of the Tisza”, the conditions and agreements of which would be recorded in an international treaty by the parties involved, guaranteeing the protection of the river, with sanctioning options. Let’s think about which nations value their waters and rivers more, even without thinking in terms of legal formulas. They know that it gives life, their life. Kitti Dubniczki, director of the Central European Support Service for Cross-Border Initiatives, gave a presentation on the management and solution methods of cross-border environmental protection problems, and the possibility of financing. Among other things, he said that environmental elements (river, air, etc.) do not know geographical or political boundaries. It is a common interest and duty to protect them, for which funds are provided by various projects and tenders. 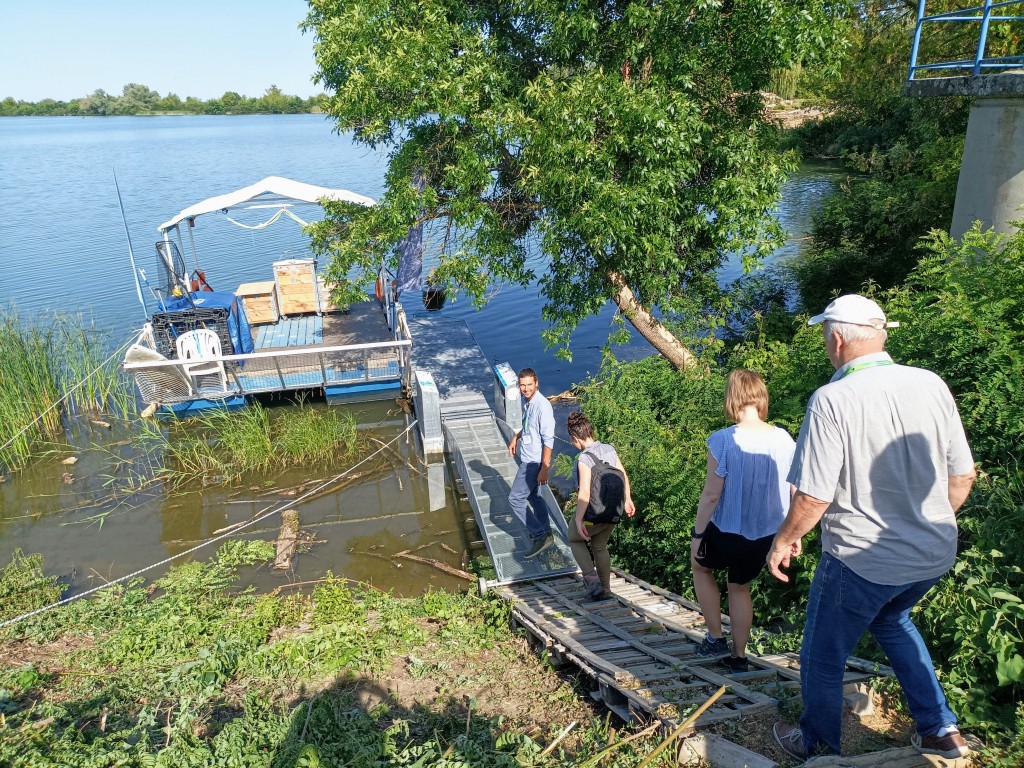 Delegates of the 7th Tisza Roundtable workshop board the floating pontoon, built of recycled plastic before a short cruise on MV Petényi.

The facilitated joint thinking in the afternoon session of the conference took place using the World Café method, which provided the participants with the opportunity to formulate their ideas and proposals on several topics in a café environment, talking to each other informally. Last but not the least, came the visit of the River Guard Center at Kisköre. The facility is unique in the world as it played a crucial part in the collection, selection and management for over 100 tons of riverine plastic, glass and metal waste, approx. 65% of which was recycled. Visitors could get a glimpse at the container based exhibition of FLEX, saw the waste selection area, stood on the recycled plastic pontoon and could make a short tour with one of the biggest waste collecting boats collecting riverine waste: the MV Petényi. As the day was coming to its end, dozens of Mayflies emerged from the river. This is the way Tisza says thanks – said one of the participants, smiling.